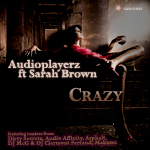 Grooveland’s two most recent releases have been getting attention from DJs around the world.

“Crazy”, written by Grooveland’s very own production team Audioplayerz and featuring Sarah Brown on vocals, has reached No. 1 on Junodownload

It has also been supported by number of DJs including those from BBC Radio 1, Kiss FM, Hed Kandi, Ministry of Sound and many others.

“Want You Around” by Swedish producer Sande also reached the charts by getting to No. 2 on Junodownload’s progressive house chart.